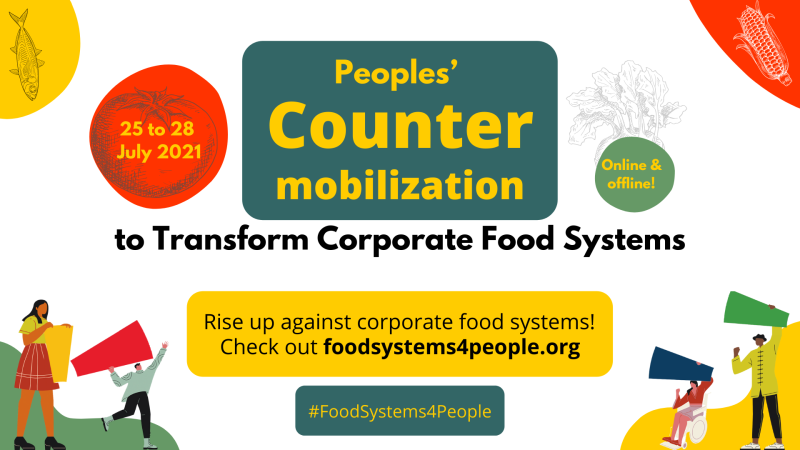 Civil society and Indigenous Peoples’ organizations launch a global counter-mobilization against the UN Food Systems Pre-Summit from 25 to 28 July 2021 in Rome and online.

Rome, Italy. 19 July 2021. Over 300 global civil society organizations of small-scale food producers, researchers and Indigenous Peoples’ will gather online (25-28 July) to protest against the UN Food Systems Pre-Summit. The People’s Counter-Mobilization to Transform Corporate Food Systems is the latest in a series of rejections of the UN Food Systems Summit (UNFSS), including a coalition of scientists who petitioned to boycott it.

The People’s Autonomous Response to the UNFSS argues that the Summit distracts from the real problems the planet faces at this critical juncture. Resulting from a partnership between the UN and the World Economic Forum (formed by the world’s top 1000 corporations), the Summit is disproportionately influenced by corporate actors, and lacks transparency and accountability mechanisms. It diverts energy, critical mass and financial resources away from the real solutions needed to tackle the multiple hunger, climate and health crises.

Globalized, industrialized food systems fail most people, and the Covid-19 pandemic has worsened the situation. According to the 2021 UN Report on the State of Food Security and Nutrition, the number of chronically undernourished people has risen to 811 million, while almost a third of the world’s population has no access to adequate food. The Global South still reels from Covid-19, unveiling the entrenched structural power asymmetries, fragility and injustice that underpin the predominant food system.

Over 380 million people make up the transnational movements of peasants and farmers, women, youth, Indigenous Peoples, pastoralists, landless, migrants, fisherfolk, food and agricultural workers, consumers, and urban food insecure joining the protest. They demand a radical transformation of corporate food systems towards a just, inclusive and truly sustainable food system. They equally demand increased participation in existing democratic food governance models, such as the UN Committee for World Food Security (CFS) and its High-Level Panel of Experts (HLPE). The UNFSS threatens to undermine CFS, which is the foremost inclusive intergovernmental international policy-making arena. By exceptionally prioritizing a human rights-based approach, the CFS provides a space for the most affected to have their voices heard. Yet the multilateral UN system is being hijacked by corporate interests to legitimize an even more detrimental, technologically-driven and crisis-ridden food system.

This counter-mobilization reflects concerns about the Summit’s direction. Despite claims of being a ‘People’s Summit’ and a ‘Solutions’ Summit, UNFSS facilitates greater corporate concentration, fosters unsustainable globalized value chains, and promotes the influence of agribusiness on public institutions.

False solutions touted by UNFSS include failed models of voluntary corporate sustainability schemes, ‘nature-positive’ solutions which include risky technologies such as Genetically Modified Organisms and biotechnology, and sustainable intensification of agriculture. They are neither sustainable, nor affordable for small-scale food producers, and do not address structural injustices such as land and resource grabbing, corporate abuse of power, and economic inequality.

The parallel counter-mobilization will share small-scale food producers and workers’ realities, and their visions for a human rights-based and agroecological transformation of food systems, highlighting the importance of food sovereignty, small-scale sustainable agriculture, traditional knowledge, rights to natural resources, and the rights of workers, Indigenous Peoples, women and future generations.

Discussions will center on real solutions: binding rules for corporate abuses, ending pesticide use, and agroecology as a science, practice and movement.

The program will include the following activities:

Further information will be provided during a media briefing on 22 July 2021 from 13:30 to 14:15 CEST, followed by a Q&A session. Please register here to participate.