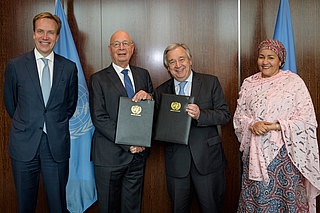 Denouncing the Strategic Partnership Agreement between WEF and the UN

With the annual meeting of the World Economic Forum (WEF) in DAVOS around the corner, hundreds of CSOs reiterate comdemnation of the partnership between the corporate world with the United Nations (UN).

As corporate executives fly into Davos for the annual meetings of the World Economic Forum (WEF), more than 400 civil society organizations and 40 international networks have denounced a Strategic Partnership Agreement between WEF and the UN and called on the United Nations (UN) Secretary-General to end it.

Signed in June 2019, the agreement promises to ‘accelerate the implementation of the 2030 Agenda for Sustainable Development’ by deepening institutional coordination and collaboration between the UN and the WEF. The agreement grants transnational corporations preferential and deferential access to the UN System at the expense of states and public interest actors.

The civil society condemnation of the agreement was made in an open letter in September 2019 that said it ‘delegitimizes the United Nations and weakens the role of states in global decision-making’.This ‘preferential access’ would undermine the mandate of the UN as well as its independence, impartiality, and effectiveness in holding businesses to account. ‘This agreement between the UN and WEF formalises a disturbing corporate capture of the UN. It moves the world dangerously towards a privatised and undemocratic global governance’, says Gonzalo Berrón of Transnational Institute, one of the key organisers of the open letter.

Although corporate influence has long been wielded in the UN system, under the new terms of the UN-WEF partnership, the UN will be permanently associated with transnational corporations.  In the long-term, this would allow corporate leaders to become ‘whisper advisors’ to the heads of UN system departments.Harris Gleckman, a former UN official and senior fellow at the University of Massachussets says ‘This strategic agreement is a coup for the corporate leaders at Davos, but what does it offer the UN and the international community? This gives some of the most controversial corporations unprecedented access to the heart of the UN, yet it has not even been properly discussed by the UN’s country members and certainly not by the broader public.’

The UN system is already under a significant threat from the unilateralist instincts of the current US Government and a new wave of authoritarian leaders who question a democratic multilateral world. However, this ongoing corporatization may well have longer-term damaging consequences, given that many corporations in WEF bear responsibility for today’s leading social and environmental crises as a result of their practices including tax evasion, human rights violations, environmental contamination, climate pollution and corporate intervention in democracies.

To prevent this, the UN must adopt effective mechanisms that prevent conflicts of interest, support the role of peoples and communities which are the real human rights holders, and find new ways to increase democratic accountability within the international governance system. According to Sofia Monsalve, FIAN International Secretary-General, “The UN should acknowledge the different roles of private interest and of rights-holders that look after common goods and benefits.  Corporations in the global industrial food chain alone destroy 75 billion tons of topsoil annually and are responsible for the annual loss of 7.5 million hectares of forest. This destruction, along with other factors, leaves 3.9 billion underfed or malnourished people. The WEF represents the interests of those who destroy the environment and abuse our human rights. It can not be considered a strategic partner in solving the world’s crises."