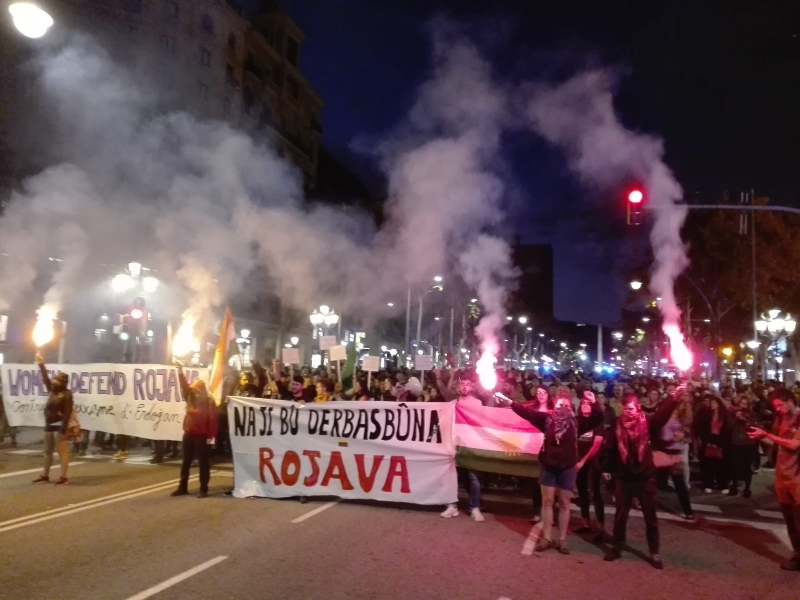 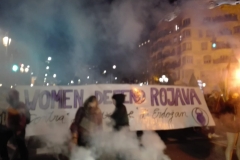 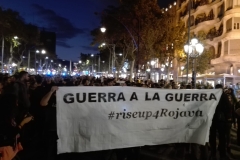 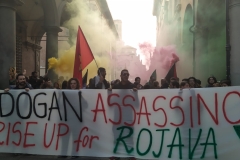 On 9 Oct 2019, the Turkish state started its invasion and occupation war on the territory of Northern Syria. The Turkish army has been attacking all major towns and settlements along the border with airstrikes and mortar shelling. According to figures published by the Kurdish Red Crescent during only the first five days of the attacks at least 46 civilians were killed and 139 wounded – including many women and children. At present, the Turkish army together with a so-called ‘National Syrian Army’ composed of mercenaries from different terror groups also try to invade on the ground. At the same time, ISIS sleeper cells have started new attacks across North Syria. SDF and YPJ-YPG forces that liberated North and East Syria from the IS terror regime, now are dedicating their lives to protect the people from new occupation and massacres. Women who liberated thousands of women from slavery under IS are now bombed by a NATO army.

Millions of people’s lives from all different ethnic and religious communities in this region are under threat. Ten thousand of families have been displaced. Beside mainly Kurdish and Arabic populated villages, Christian neighborhoods have been specifically targeted. It is obvious that these attacks are carried out with the aim of ethnic cleansing and demographic change. Turkish occupation and war crimes in Afrin starting in January 2018 have been condoned by the international community until today. Therefore, Turkey strives now to expand its territory and impose its rule on further regions of North and East Syria, breaching international law and the sovereignty of Syria.

At the same time, Turkey neglects the will of the peoples in the region that have been living peacefully together under democratic self-administration. Turkey‘s attacks are directed against the gains of the women’s revolution in Rojava that has been a source of inspiration for women from all over the world. Women who have been a vanguard in building up an alternative social model of democratic, ecological society based on women’s liberation are targeted by jihadist killer teams. The co-chair of the Syria Future Party Hevrin Xelef was assassinated in an ambush on 12 October when she was on her way to visit injured and displaced people in the Til Temir region. In spite of 8 years of the continuing war in Syria, the regions of the Autonomous Administration in North and East Syria has succeeded in ensuring human needs and democratic rights for all people in this region. Hundreds of thousands of war refugees from different regions of Syria found refugees here. Without any noteworthy support of UN organisations these refugees have been welcomed, protected and supported by the structures of the Autonomous Administration.

While the Erdogan government openly announced this war and his occupation plans, the international community – including UN bodies – did not take any adequate measures to stop this from happening. Furthermore, hegemonic powers like Russia and the US encouraged Turkey‘s aggression. The genocides of the Ottoman Empire against the Armenians and Syriac people in 1915 and the massacres against the Kurdish people in Dersim, Halebje, Nussaybin, Cizire, Afrin... are still in our minds. Today again, crimes against humanity have been prepared and carried out openly as the calculation of war profits counts more than international laws, human rights and values.

Women in Rojava have always underlined: “We have defended the women’s revolution with our sacrifices. We lead our struggle on behalf of all women in the world.” Turkey’s war against women and peoples of North and East Syria as an aggression against all of us. It targets the gains and values of our struggles for women’s rights, freedom and justice - everywhere. With the international campaign Women Defend Rojava we unite against fascism, occupation, and patriarchy. We raise our voices for the recognition of the autonomous self-administration in North and East Syria, for peace and justice in Syria.

To prevent new genocides and feminicides in the 21st century we urge the UNSC, all relevant bodies of the international community and governments to take urgent actions to

• Establish a No-Fly-Zone for the protection of the people’s lives in North and East Syria;

• Take all war crimes and war criminals to justice;

• Acknowledge the democratic Autonomous Administration of the people of North and East Syria;

• Take immediate steps for a political solution of the crisis in Syria with the representation and participation of women and people representatives from all different national, cultural and religious communities in Syria.

Documents
A Women's revolution in Rojava.mp4
Worldwide mobilization for Rojava.mp4