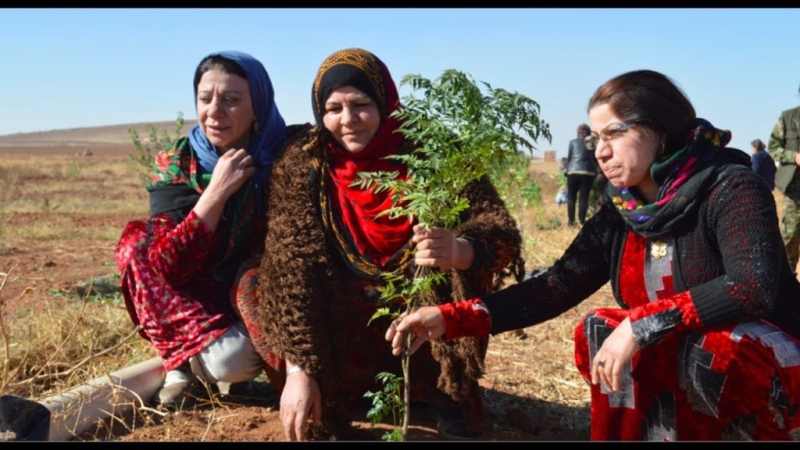 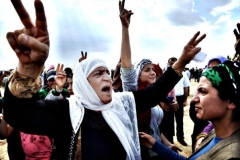 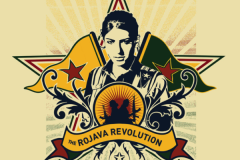 21st century is the century of Women‘s Revolution!

The following statement, published by Radical Ecological Democracy, was presented by Besime Konca of the Kurdish Women’s Movement at “Defend the Sacred” Conference, 17th August 2019.

We have come together in Tamera, Portugal to collectively find a way to defend the sacred. But what does “sacred“ even mean? In the name of the sacred there have been countless wars, women have been burned as witches, massacres have been committed. In today’s world it is difficult to find anything sacred. Capitalist modernity has used and destroyed everything sacred and beautiful. There is so much suffering that there seems to be no trace of holiness left. But we as Kurdish women’s movement, in our struggle against this system of destruction, exploitation, death and superficiality, have discovered so much that is sacred to us that I do not know where to begin. For us, everything is sacred that has retained its independence, that cannot be used, that cannot be subjected. For us, people are sacred who, despite everything, have kept a conscience and fight for justice. For us, a respectful attitude towards nature, towards other people, towards the historical efforts and struggles of our comrades is sacred. For us every second of the life of our friends is sacred, because we know that capitalist modernity wants us to be eliminated. We are a people living in the area of the Neolithic Revolution, who have always kept their attachment to the achievements of this time. The natural, free society of the fertile crescent, the cradle of humanity, is still alive in us and this is also sacred. For us every resistance against the ruling system is sacred and with our struggle and our organization we want to defend this important heritage of humanity.

We have been fighting since the last 40 years for the liberation of women. We fight against all forms of domination, from patriarchy to religious fanaticism, from capitalism to racism, from imperialism to the nation state, from exploitation of the people to the exploitation of nature. We not only criticize the existing ruling system, but also build an alternative life. On the basis of the history of our people Mr. Abdullah Öcalan developed an alternative system to build a democratic, ecological and gender-liberated society. He named it Democratic Confederalism. And in order to this alternative to be successful, Öcalan says we must firstly kill masculinity within ourselves, secondly achieve women’s revolution and thirdly reestablish a relationship of balance with the rest of nature. Within this frame we have built an ideological, political, economic, scientific, social and cultural alternative force. In all of these areas we have also built an autonomous women’s organization:

We defend ourselves. Recently the YPJ in Rojava announced a great success against ISIS. With their fight against ISIS they have defended all women worldwide!

Ideologically, we organize ourselves in an internationalist women’s party. Our principles are free will, struggle, organization, appreciation of our origin (welatparezî) and aesthetics.

We organize ourselves socially through women’s councils and various women’s organizations in the communities. In our autonomous women’s structures we decide which of us assumes responsibility in the structures of society as a whole. All responsibilities are distributed according to the co-chairing principle. A fair distribution of responsibility according to origin is also a prerequisite for the peaceful and cooperative co-existence of many different ethnic groups.

Economically, we are building a system of cooperatives and communal economic collectives that are need-driven and sustainable and value all the effort and work needed to build a free society.

In Rojava we have established “JINWAR”, an autonomous women’s village that is integrated into the decision-making processes of society as a whole and in which women live together according to ecological and democratic principles.

Education is particularly essential for the development of a new society. We have created a new principle of Jineolojî against positivist and androcentric science. Today’s science contributes to the oppression of the people, therefore another form of science is needed – that is starting from a perspective of women. We call it Jineolojî, the science of woman and free life. Jineolojî is a science for society and is determined by the society’s questions and needs. It is an alternative to the patriarchal organization of science and is not confined just to those forms of knowledge, which patriarchy acknowledges. Jineolojî is the knowledge of the people that are still living in connection with nature and their history, of wise women, of all the resisting people! We want to explore the miracle of free life and free it from its patriarchal shackles, from being imprisoned in the cage of the patriarchal nuclear family and from sexual exploitation. We do show that women have their own will and that they can perform all the roles in society. They are not just the partner of a husband, the daughter of a father, the sexual relationship of an activist.

Politically we have implemented a system that we call co-presidency in which men are women represent equally all political activities. Through our struggle Kurdish women now are playing an important role in Kurdish and Middle East society and are able to overthrow the plans of imperialist and hegemonic forces in Middle East!

But how did we get to this point? Where did we lose our freedom and domination appeared? If we really want to fight and overcome this system of oppressive rule effectively, we have to search for its roots. It goes back over 5000 years! The social role of women has not always been, as has been described by the capitalist, so-called civilized society, today. In a natural society, women had a different role: they were considered to be those who can determine life and death, who have special powers; the first goddesses were portrayed as women. The inventions that were decisive for humanity were made by women: the development of language and culture, the discovery of fire and agriculture, the development of healing knowledge in harmony with nature. In matriarchal societies, it was and is women who manage and distribute the resources of the community, who bring peace, justice and the survival of the community. People saw themselves as part of nature. The social human being is an ecological phenomenon, that was brought forth by nature itself. It originated in an evolution lasting millions of years and contains all these development processes in itself until today. A human being is actually nature becoming aware of itself. Thus, we assume a living, creative and curious nature. The separation of an analytical, conscious and empathic, intuitive intelligence is also one created by patriarchy to remove us from the source of our power. Even if we want to turn to the sacred, we must first liberate it from the many layers that the rulers have placed over it, to use it for its wars, massacres and feminicides. The sacred was alienated from people right in the beginning of patriarchy. Only a priestly caste was emancipated and it had the power to define what was sacred, and they defined sacred as non-human. Oppression also starts here: With time when we lost our own holiness and transferred it to abstract gods and then later to the one true God.

The oppression of society begins with the enslavement of women and nature. In a war against women that lasted more than 1000 years, a hierarchical mentality emerged that divided man and women, human beings and nature, divided people into classes and made the lower class an object for the one which was higher. This mentality has evolved over thousands of years and taken on new forms in religion, monarchy, the nation state, industrialism, capitalism, globalism. But the basic principles of separation, exploitation and destruction remain the same.

In order to overcome this patriarchal mentality, we have begun to organize ourselves autonomously as women. We want to rediscover and regain our strength and our will. We want to use our energy to build an alternative. Domination is built on our work, on our effort, on our strength. If we organize and detach ourselves from the patriarchal system in building something new, capitalist modernity will lose its foundation. Capitalist modernity is not invincible, because it is actually based on lies, falsehood, and irrationality and has no strength of its own. For, in the last 5000 years women have not subjected themselves, they have always kept their resistance and their connection to democratic society, nature and freedom. The matriarchal power that lives on in us is our strength, today! Today, women and indigenous people in particular still have the strength and the knowledge in themselves to oppose capitalist modernity and instead build another world based on respect, caring, sharing, collectivity, solidarity, love, diversity and freedom.

After 5000 years of patriarchy, it is not easy to overcome the patriarchal mentality instantaneously. In Rojava we have proven for 7 years that it is possible to live together in diversity and peace. But all that we have built up in the 7 years of the Rojava Revolution and what is based on our experiences from more than 40 years of freedom struggle is today – once again – exposed to a serious threat of the fascism of the Turkish state, which sees in war the only way to keep their dictatorial regime going. Erdogan and his henchmen openly threaten to repeat throughout Rojava what they did with Afrin in January 2018. That means no less than genocide, feminicide, torture, expulsion of the women’s revolution in the whole area. It is particularly cynical to refer to the preparation for renewed displacement and murder of the local population as a “peace corridor”.

After years of war, the people of the region are yearning for peace. But there will be no peace until all democratic and peace-loving peoples around the world rise up against patriarchal governments and against patriarchal mindset such as Turkey, Russia, and the USA. Just as the war in Syria is an immediate result of the policies of hegemonic powers, an attack on the self-organization of the local population and the self-determination of women is an attack on the lives of all peoples and women around the world. The aggression on Rojava is an attack on all of humanity and should be understood as such. The Rojava revolution is an internationalist one, and as it must be defended.

To bring together our struggles and to unite in respect to our diversity as Kurdish women‘s movement we propose to build a Confederation of the Women in the World. Because we all know that variation, diversity and multitude is the source where our strength comes from. We women have shown many times that we will never give up our determination to change the world and the unjust and sexist system. Freedom belongs to us and can be achieved through organization and struggle. Patriarchy is not infinite, it can be destroyed! Despite all kinds of massacres and breakdowns caused by male domination, we have said, “We are here and we are strong enough to change this world!” The women of Rojava have expressed their determination to resist everywhere in case of an occupation. In this sense, we call upon all of you to participate in this dignified struggle: the struggle unites women; the resistance of women liberates the world!