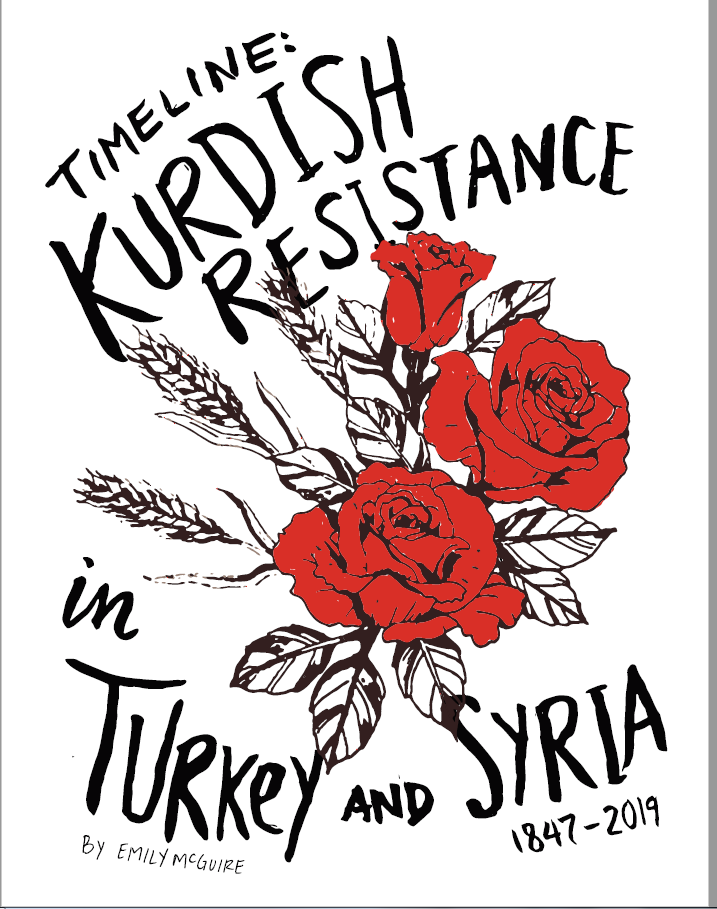 The American news media, over the last couple of decades, typically shows a very dualistic image of the Kurdish people. They are either ruthless fighters (whether US allies or “terrorists”), or victims of brutal genocide (at the hand of Saddam Hussein, in 1988). It takes some digging beyond recent journalism to unearth the story of the Kurds, since history is sadly often written by the colonizer rather than the colonized.

Emily McGuire wanted to excavate the ingredients to the Kurdsʼ hard-earned autonomy in Northern Syria-a feminist, radically democratic autonomy, enmeshed with Syriaʼs ongoing proxy wars while resisting fascism just a few miles to the North in Turkey. Many of the events that seemed most pivotal to Kurdish resistance in Turkey and the development of Rojava (NES) in Syria did not fit the fighter/victim binary of the Kurds shown in Western media; and they bore very little resemblance to the glorious leftist fantasy of a militant Vanguard party.

Most of the events on this timeline are centered around local & parliamentary elections, alternative (Kurdish language) media and publishing, and ordinary people organizing and engaging in civil disobedience. For decades, ordinary people resisted homogenization into the dominant culture of the nation-state, while forcing a series of tipping points. It certainly didnʼt hurt to be allied with the Kurdistan Workerʼs Party (PKK), but the importance of a broad popular base engaged in activism and electoral politics must be highlighted.

It became clear, as the author researched, that radical democracy and mass engagement in the political process were valued close to the heart of Kurdish life in Turkey long before the inception of Rojava. The legacy of the pro-Kurdish left in Syria and Turkey is one refreshingly uninhibited by sectarianism, and unhindered by the false dichotomy of reform versus revolution.