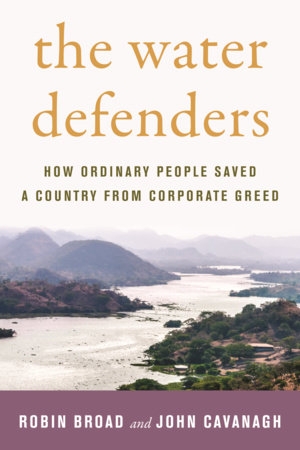 In a time when countless communities are resisting powerful corporations—from Flint, Michigan, to the Standing Rock Reservation, to Didipio in the Philippines, to the Gualcarque River in Honduras—The Water Defenders presents the inspirational story of a community that took on an international mining corporation at seemingly insurmountable odds and won not one but two historic victories.

In the early 2000s, many people in El Salvador were at first excited by the prospect of jobs, progress, and prosperity that the Pacific Rim mining company promised. However, farmer Vidalina Morales, brothers Marcelo and Miguel Rivera, and others soon discovered that the river system supplying water to the majority of Salvadorans was in danger of catastrophic contamination. With a group of unlikely allies, local and global, they committed to stop the corporation and the destruction of their home.

Based on over a decade of research and their own role as international allies of the community groups in El Salvador, Robin Broad and John Cavanagh unspool this untold story – a tale replete with corporate greed, a transnational lawsuit at a secretive World Bank tribunal in Washington, violent threats, murders, and –surprisingly– victory. The husband-and-wife duo immerses the reader in the lives of the Salvadoran villagers, the journeys of the local activists who sought the truth about the effects of gold mining on the environment, and the behind-the-scenes maneuverings of the corporate mining executives and their lawyers. The Water Defenders demands that we examine our assumptions about progress and prosperity, while providing valuable lessons for those fighting against destructive corporations in the United States and across the world.

Robin Broad is an expert in international development and won a prestigious Guggenheim Fellowship for her work on this project, as well as two previous MacArthur fellowships. A professor at American University, she served as an international economist in the US Treasury Department, in the US Congress, and at the Carnegie Endowment for International Peace.

John Cavanagh is Director of the Washington-based Institute for Policy Studies, an organization that collaborates with the Poor People’s Campaign and other dynamic social movements to turn ideas into action for peace, justice, and the environment. Previously, he worked with the United Nations to research corporate power.

The book, in English language, can be pre-ordered from the following links:
Beacon, Penguin Random House, Amazon, Barnes and Noble, Bookshop.org, Indiebound, Powell’s