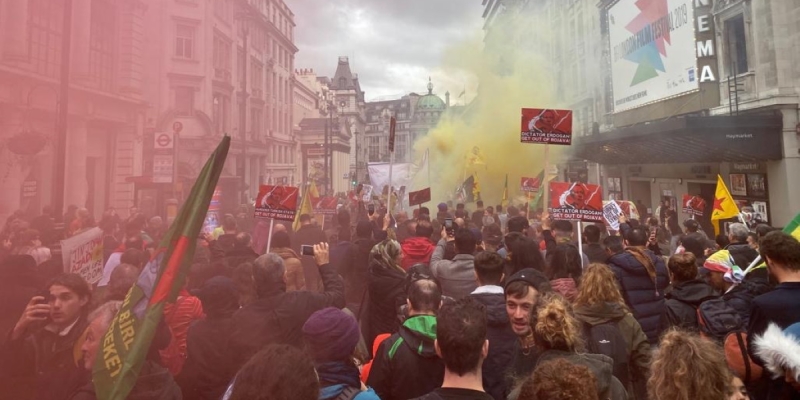 The military alliance between the Kurdish-led Syrian Democratic Forces (SDF) in Northeastern Syria and Washington was always one of mutual desperation. The US needed to appear to have a credible Syrian ground game in the eyes of its rivals. Kurds in Rojava needed US airpower and other protections. There was never a political or ideological alliance – only a tactical one.

The US betrayal of the SDF and Rojava has long seemed inevitable. It would be yet another in a century-long series of betrayals of the Kurds by imperial powers in the perennial struggle to control the Middle East. But when it came in early October, Donald Trump’s order to withdraw US forces from Northeast Syria came as a surprise. It comprised the geopolitical equivalent of tossing an incendiary grenade into a lake of petrol.

Now, after sacrificing more than 11,000 fighters in the struggle against ISIS, the SDF and the Kurds find themselves once again abandoned and betrayed by the US. Trump’s rash decision to let somebody else ‘figure the situation out’ was taken as a green light by Turkey’s autocratic president Recep Tayyip Erdoğan to launch his long-anticipated invasion, occupation and ethnic cleansing campaign in Rojava.

It has also dealt a disastrous blow to US Empire. Many of its European allies have denounced the decision. A joint statement issued by a coalition of US and European lawmakers have condemned Trump’s snap decision. Several former US military commanders have come forward in a rare public critique of the Commander-in-Chief. Even Trump’s closest Republican allies have derided the move, joining with Congressional Democrats to pass a joint resolution condemning the withdrawal. From these reactions across the political spectrum it is clear that Trump is out on a limb and alone on this one.

The pathetic, too-little-too-late, attempts to backpedal have come off as a deadly farce. Washington’s negotiations of a sham ‘ceasefire’ with Erdoğan resulted in the complete endorsement of Turkey’s plan for the large-scale ‘demographic displacement’ of Kurds and other groups in Rojava. Erdoğan’s plan was further ratified when he and Vladimir Putin jointly issued commands for the removal and disarmament of the SDF from border areas, including Kurdish majority cities such as Kobanî.

Beyond facilitating Erdoğan’s dreams of a Neo-Ottoman caliphate, Trump has handed Putin and his client, Syrian dictator Bashar al-Assad, a tremendous gift. Russia is now the preeminent imperial power broker in the region and al-Assad and Erdoğan are poised to divide up the spoils of Rojava.

A history of brutality

Since the modern state of Turkey’s founding nearly a century ago, its policy towards Kurds has been particularly brutal, involving political exclusion, systematic denial of Kurdish identity, language, human rights and life. Kurdish existence is considered an affront to the Turkish state and nationalistic notions of ‘Turkishness’. This long-standing policy has continued and intensified as Erdoğan has gained more and more power in recent years.

Under Erdoğan’s leadership, virtually all of Turkish civil society has come under attack by the state, with the greatest violence reserved for Kurds. The current regime has jailed or investigated tens of thousands of public servants in Turkey, including members of the parliament, the judiciary and academics. Erdoğan is the world’s leading jailer of journalists.

Between July 2015 and December 2016 Erdoğan unleashed a massive wave of state terror against Turkey’s restive Kurdish population. Thirty majority Kurdish towns were bombed and shelled by the Turkish military. An estimated 355,000 people were internally displaced and hundreds were killed.

To defend the indefensible, Erdoğan claimed this was all an anti-terror operation. So it should be no surprise that, yet again, Erdoğan costumes his illegal and unprovoked attack on Rojava in the guise of an anti-terrorism operation. This is all especially ironic since the Turkish state has been a key benefactor of ISIS in the region, whilst the Kurdish-led forces in Northern Syria have been the greatest threat to ISIS.

In reality this invasion is driven by well-established attitudes and policies aimed at eliminating Kurds as a people and destroying the liberated society they are attempting to build in Northern Syria. Kurds in Rojava ultimately seek not separatism, but a decentralised and democratic Syrian society – a ‘democratic nation’. This is what Kurds are fighting for. This is what Erdoğan cannot accept.

Kurds were organising autonomous civil society institutions, often in secret, for decades in Syria before officially announcing their autonomy in 2012 during the early days of the Syrian Civil War. Much like the Spanish partisans in the 1930s, Kurds took the initiative to make revolution inside the larger civil war. The comparison with Spain is also apt for the reason that this was a true people’s revolution grounded in a form of bottom-up communalism called democratic confederalism. The theory and practice of democratic confederalism is based in three pillars: direct communalist democracy, gender liberation, and building an ecological society.

Democratic confederalism rejects narrow statist nationalism and values the real and deep diversity among peoples existing on the ground in the Middle East. Thus, since 2012, even as they were confronted with the existential threat of ISIS, and with the threat of a Turkish invasion always on the horizon, Kurds have pursued a policy of women’s liberation, establishing deeply democratic institutions, inter-community cooperation and peace building. This is the revolution that Kurds have spearheaded, and this is the real threat regional autocrats like Erdoğan truly fear—the threat of a good example and a free society just across the border.

The ongoing occupation of Afrin, one of Rojava’s three original cantons, provides a frightening indication of Turkey’s long-term designs on Rojava. Under the Orwellian banner of ‘Operation Olive Branch’ the Turkish military, aided by jihadist mercenaries, launched a brutal invasion of Afrin on 20 January 2018. After two grinding months of resistance Kurdish forces staged a strategic retreat, as Turkish airpower had proved insurmountable.

Since the occupation began, life in Afrin has deteriorated. An estimated 151,000 people have been internally displaced. The city and surrounding region have been given over to jihadist mercenaries and their families for resettlement. The Jihadist gangs supported by Turkey are known for their well-documented brutality, strict rendering of Sharia Law, and shared goal of establishing an Islamic caliphate. Their record of war crimes, including demographic replacement, murder, rape, theft, and kidnapping in Afrin speaks for itself. Despite the SDF’s success against ISIS, the Turkish military’s advanced weapons and airpower makes Turkey a vastly more formidable threat.

Today in Syria, Turkey’s military and its jihadist proxies have already been busy committing war crimes. Turkish state media has hailed the assassination of Hevrin Khalaf, 35, by jihadists. Khalaf was a young woman and leading politician working to build a broad inclusive Syrian polity. Her car was overtaken on the M4 highway and riddled with bullets. She and her driver were dragged out of the vehicle, physically abused and executed. This war crime was proudly captured on video. Another video has surfaced that shows the gruesome eradication of dozens of civilians when they came under attack by either a Turkish airstrike or shelling. Yet more video exists showing Jihadists executing prisoners. There is some evidence suggesting Turkey’s use of white phosphorous, a chemical weapon, against civilians. Ethnic cleansing is underway, as tens of thousands of civilians have already been displaced.

Rise Up For Rojava

To paraphrase Noam Chomsky, there are two superpowers on the planet: empire and global civil society. The last few weeks have witnessed a tremendous outpouring of solidarity with Rojava around the world. Without weapons, financial support and the blind eye turned by the international community, Turkey would not be able to pursue its genocidal aims. We must urgently stand with the people in Rojava and against the atrocities being committed against them. We must recognise that their struggle is our common struggle, and the sacrifices they have made in the fight against ISIS in Northeastern Syria have been sacrifices made for us all.

The international solidarity community has designated Saturday 2 November World Resistance Day and there are many ways to get involved. Donate to Heyva Sor a Kurd, the Kurdish Red Crescent, which is in desperate need of funds to carry out lifesaving work in the war zone. Now is the time to rise up for Rojava and embrace the popular Kurdish saying, ‘Resistance is life!’ Now is the time, tomorrow will be too late. Follow #riseup4rojava for updates.